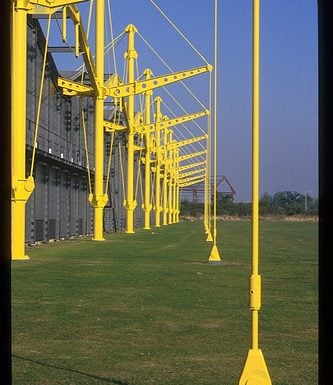 I was delighted to hear that the Renault Distribution Centre (now known as Spectrum) in Swindon, designed by Foster + Partners and completed in 1983, three years before I began my architectural studies, has been listed by Ed Vaizey under the advice of English Heritage.

When I was an architecture student this piece of High-Tech architecture was the subject of great adulation, and some ridicule, by tutors and students at the University of Liverpool. It is a great piece of history.

The Renault building, as we called it, exhibits many of the key features of High Tech architecture.

Within six years, the school of architecture and building engineering at the University of Liverpool had its own temple to High Tech, the new studio, which appeared to have landed on the roof of the architecture school, formerly a Georgian Terrace with a 1930s modernist courtyard building to the rear. Within the studio, which dropped down into the courtyard and grew up over the roof, was another ‘altar to M&E’, the air handling system, which was positioned at the end of the cathedral-like space in a suitable tribute.

Unfortunately, due to budget overruns, the air-handling unit had been scaled back to cut costs. This resulted in the loss of cooling, and as the building was pretty much a poorly ventilated greenhouse, our working space during the summer of 1989 reached 98 degrees C in the shade, and people’s models began to melt.

Many will say that this is typical of ‘cutting edge’ architecture, to go over budget and fail due to late cost savings. I don’t think the architects can be solely to blame for that, but cost management is an essential skill that a good architect must have. Which is why a whole section of my blog is entitled ‘Its about Money Stupid’.

The Renault building wasn’t without its problems either. The beautiful slender columns which supported so much compressive load to hold up the roof, also had to accommodate rather undersized rainwater downpipes. These turned out to be too small for the huge roof area, and flooding was common. Eventually the building was fitted with a syphonic rainwater drainage system to cope with the overload.

Design often includes mistakes, but this one could have been overcome if the architects had remembered something that we were taught at architecture school. The best way to connect two opposing elements is to insert something to mediate between them. At Renault too many things were being crushed into a tiny space. Moving them apart would have made room for them all to work properly.

But perhaps that wouldn’t have been as pretty.

As we mark 50 years of #Pride, the Tory hostile environment could see a gay Nigerian man deported and his life put at serious risk of persecution and harm.

URGENT: A gay Nigerian man who has been widely outed in the press will be on this flight tonight, at serious risk to his life #StopTheFlight @hifly_airline PLS RETWEET https://twitter.com/DetentionAction/status/1542176386344943618

BREAKING: 91.5% of @CWUnews members in BT - 9,000 of whom are call centre workers - have voted to strike against a real-terms pay cut. If action take place, it will be the first national call centre workers’ strike in British history.