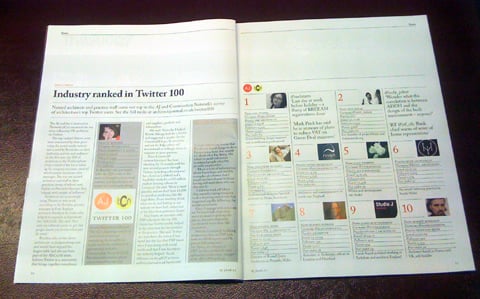 The last few weeks have been rather strange for me. Having been an active user of social media for nearly eight years (way before that term even existed) I suddenly find my activites are of interest to the trade press, and the ‘architectural establishment’.

Its very flattering to be asked to write for a publication, but there are downsides, especially when you’re activities are suddenly flavour of the month. Editorial control isn’t yours, you have to deliver to a strangers’ deadlines, but more particularly, the agenda of your new fan is probably going to be slightly different from the one you envisioned for yourself.

When I wrote about architects twitter use ‘doing a hockeystick’ back in early 2009, my league of architects was of interest to a growing band of bloggers and tweeters who wanted to find each other and start talking. And yes, being on a ranked list helped encourage some healthy competition. The competition then was for the number of followers, which was one of the few metrics available. Then there was the kudos of being an early adopter, the earliest to use twitter, an accolade always to be held by @eversion but there’s always the possibility that someone was here before him…

Now its different. What we are doing here is getting the opportunity to show people who don’t use social tools what we can do with them. Now we are in print. That is a moment that should be celebrated, and savoured. 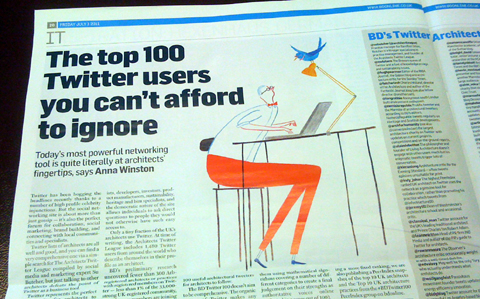 This is a huge opportunity, but with the ‘holy grail’ of publication in the AJ and BD ringing in our ears, we can lose sight of what we are here for.

I like Christine Murray’s editorial because it tells non-users that we have made a home for ourselves on the internet where we are doing good work well. There are, however, many things that were left out of the articles which (having editorial control here) I’d like to share here. This is (obviously) just the beginning, but it is what I have to share today. Much more is to be found on this site, and on the sister blog, Just Professionals.

You are your brand.

Being online for your company (officially or unofficially) is a huge responsibility. Don’t take it lightly, because your boss won’t. Remember that you’re not down the pub, you are searchable by google.

Those business owners (like my boss Roger Gilles) who have enabled, permitted, or even silently ignored, our activities online are to be applauded for the thing they have done, that the large firms attempted to close off with firewalls and blanket social media bans. Remember all those posts about that? What we have done here has blown all that rubbish out of the water.

It is sobering to think, if you are a business owner, that your employees probably know employees in many other firms in your town or city. They meet in the pub when you aren’t there. They send each other text messages. They talk about what it is like to work for you. This is happening now, and it happened 20 years ago when I did my year out in Liverpool. That hasn’t changed, its just that now your employees can find people of common interest and friends in different towns and countries. And their conversations are visible.

Talk to each other

There is some subtle ribbing going on in print about whether architects should bother talking to each other on line. Of course they should. Architects should talk to everyone online who has an interest in their interests.

When I gave a talk at the RIBA called “Why Take your Network Online” in the autumn of 2009, I ended my talk with a mosaic of the first 200 architects I had found using twitter, and described them as “Each one through their conversations and stories, redefining the brand in their own image.” The brand of ‘Architect’ is being rewritten in all our conversations.

So here we are, we have identified over 300 architects and staff on twitter in the UK, I know around 1500 all round the world, and people are listing construction and property people, journalists, housing associations, you name it.

We have all arrived here and are finding each other. We’ve started to talk about what we’re doing, and some of us have been doing quite a lot. Now is the time to celebrate what we’ve achieved so far, but next we need to start using these tools to get the profession and our practices where we want them to be.

Have you written that plan yet?

“It feels like a massive betrayal,” How London’s Olympic legacy was sold out. ⁦@ollywainwright⁩ https://www.theguardian.com/uk-news/2022/jun/30/a-massive-betrayal-how-londons-olympic-legacy-was-sold-out?CMP=Share_AndroidApp_Other