Last week I was invited by Be2camp to attend their session at GreenBuild Expo talk about the ArchitectMap project that Mark Schumann and I have developed. This is an account of what I presented. You can see the slides below.

The ArchitectMap is a crowdsourced map of construction people worldwide using twitter.

Why Should we Map? 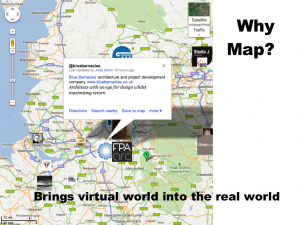 Firstly maps bring the virtual world into the real world. A map allows people who don’t use tools like twitter to see where we are, how many we are and the fact that we are near them.

Mapping is a very popular means of demonstrating activity online. Eric Fischer mapped people posting on photosite flickr(orange) and twitter (blue) or both (white) in Europe and demonstrated how popular geo-coded tools like these are.

Mapping provides another common denominator. It allows us all to see who is in our area, whatever part of the sector they work in, fostering local collaboration. 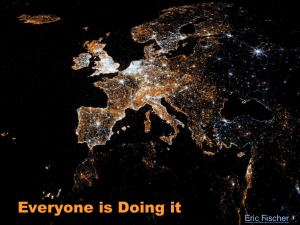 Why should we map ourselves? Because everything we do online evolves into a footprint of ourselves, and the map is the ultimate statement of this. This visibility is a good thing, because it helps people to trust us. We gradually create a time and location based footprint of our credibility online.

Have you joined the architectmap yet? You should. 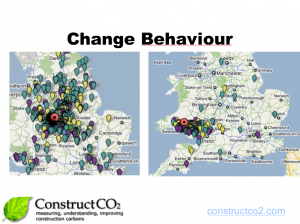 A map can help change human behaviour. Martin Brown and Vassos Chrysostomou’s ConstructCO2 project that uses mapping to show the effect of deliveries and journeys to site on the CO2 footprint of a project.

By seeing the map you can not only understand the enormity of the problem, you can also identify where you need to act and what personal action you can take to work with others to reduce the effect.

Other applications for the Architect Map? We know already that it has been used for

So how did the map begin?

How we made the ArchitectMap

When I joined Twitter in September 2008 I started looking for architects and construction people who were using it.

By January 2009 I had a small list, and was encouraged by @Luke and others to write a blog about the project. The blog turned into Just Practising (thanks for the name, @EEPaul)

In a few weeks I was able to compile a list of just fifty accounts I knew about, and over the coming weeks dozens of others found the blog post and began to add themselves to it.

A few months later I set up a dedicated twitter account just to follow those who had an architectural education – @ArchitectLeague. It now follows over 2000 accounts and I don’t update it very efficiently, there are so many of us on twitter!

On both of these accounts I publish a daily digest of the links the people I follow are sharing. Both accounts took off and have more than 13000 followers each – they have grown faster than my personal account.

Around the same time I came across a young developer called Ollie Parsley who had produced a piece of software called ‘Twitter Leagues’. Using it you could list a group of twitter users by the number of followers they had.

Today the Twitter Leagues app no longer works, but we have Peerindex to list the members of the ArchitectLeague. Peerindex uses an algorithym much more complex than simply numbers of followers, but it doesn’t seem to bring out the enthusiasm for competition that the orginal followers list had – make of that what you will!

Over the coming year I managed to track down two mapping tools. Firstly Yahoo Pipes, which worked ok but was a bit clunky and only mapped 500 users, so was obsolete to us quite quickly. Thanks to @AndyMurd for help with pipes.

Secondly I found MapMyTweeps which allowed you to make a map of your followers or those you follow (the latter in this case).

Like many applications that required Twitter Authorisation to use, MapMyTweeps ceased to operate by the end of 2010, but here you can see a screenshot from when I first found it in the Summer of 2010. Over the coming year I continued to look for suitable mapping tools for the list – without success. 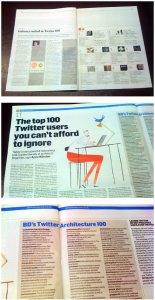 Over the years many of us have been attempting to show the rest of our industry how useful twitter is as a tool to communicate.

In the Summer of 2011 Ryan Briggs and tCn managed to interest a group of print publications by encouraging them to collate a top 100.

The first was Construction News, and shortly after the Architects Journal, BD and Property Week followed.

Ryan should be applauded for this work – it brought twitter into the radar of a much wider range of professionals. Fewer of them snigger now!

It was last Summer that Mark Schumann joined twitter, and he soon found the maps I was trying to resurrect. We had a chat on twitter and decided that a google map might be the answer, and from here the Architectmap Project was born.

Initially we added people ourselves manually to a google map. Then we set up inviting collaborators and soon the map had to split into regions as more than 200 pins confused google!

At the moment we still have regions and we also have separate maps for Architects (and all other consultant types), Contractors, Product Manufacturers and Suppliers, and Graduates. These maps are all individual Google Spreadsheets to which you can add your own details via our website. However, we wanted the map to involve everyone in the Built Environment, and we don’t want to split people up until users choose to. So our new version of the map puts everyone on one map and you can then filter down from there.

There are now over 1000 users plotted on the ArchitectMap and plenty of potential to add more as we build a new platform to house them. But additionally we know that the audience for the map is much higher – our original google map has had over 84,000 visits.

Here are some shots of the maps from earlier this year, close up: 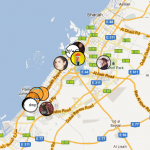 Here is the Dubai contingent, with Mark in the middle. 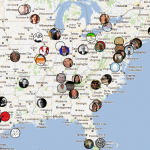 Here are the consultants in the Eastern US. After UK this is the most popular map. 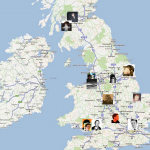 Here is the graduate map in the UK as it stood at the start of the year. Graduates (and students) working in the built environment are very welcome to join – its free! 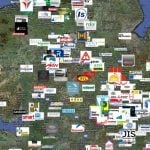 Here is the Manufacturer map which lists manufacturers and suppliers. Thanks to Karina at Barbour Product Search for helping us get their database on the map – more and more of these firms are using twitter and we are helping them to join as they see the value of being in this community.

So we have our map – what do we do next?

Quite naturally as a social media project, we need to build outposts out on the web to share our content with others.

We have a website which draws together all the strands and displays the maps. You can see who is using it, add yourself and download a ‘We’re on the ArchitectMap!’ button (‘I’m on the map’ buttons also available) for your website or blog.

You can see the coverage we’ve had from World Architecture News, Arch Daily, DesignMENA and the Independent. The Independent property blog introduced the Architectmap as a tool for finding a local architect you can get to know on twitter for your domestic project. What a great application!

We also have a Facebook community where we share news, run competitions and generally interact with the community. 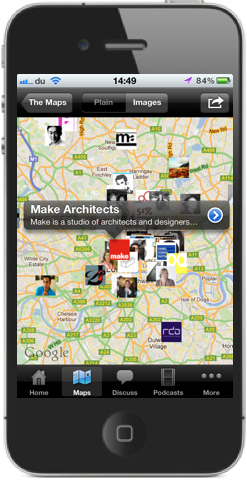 At Christmas 2011 Mark developed the first iPhone app for the Architect map. Over a few short months there have been five updates and you can now use the app to access a whole range of things including some you can’t see on the browser version.

In March 2012 the iPhone Architect Map App won the Woobius/Specifinder Built Environment App award for ‘Best Useful Tool or Guide’ 2012. Quite an achievement for such a new product!

You can download the iphone app from the App store. It continues to evolve as we add functionality, and we are hoping to develop an android version soon.

We share video that describes any aspect of our industry for others to share and learn from. One example is Kirsty Cassel’s brilliant video about what it is like to study architecture part time whilst working full time in an architects office.

If you have a subject you’d like to make into a video podcast do get in touch, we’d love to hear from you.

This is an interactive visualisation of all the conversations on twitter using the #architectmap hashtag. People all over the world are telling their followers about the project. 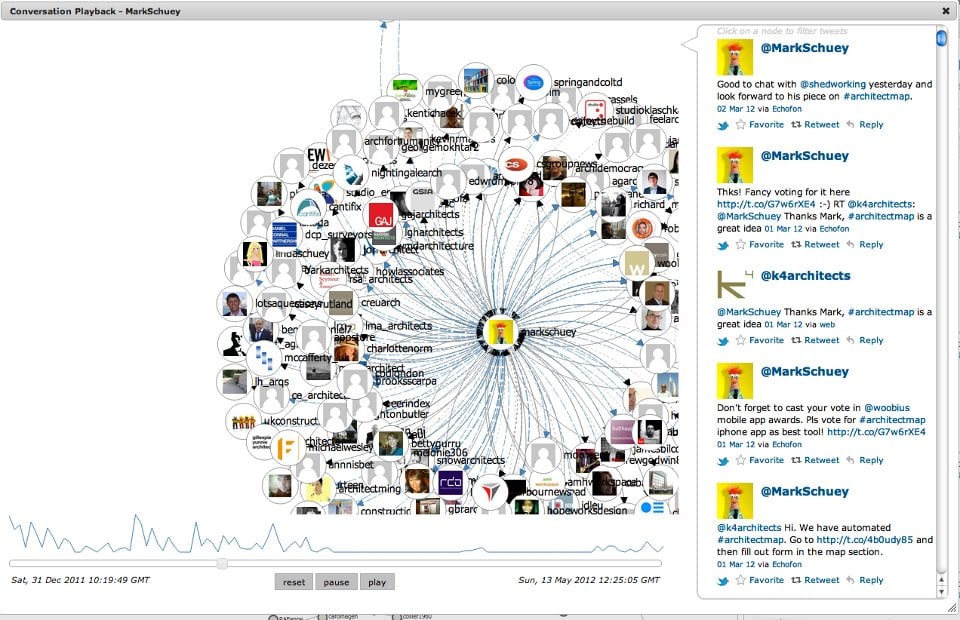 Our newest addition is 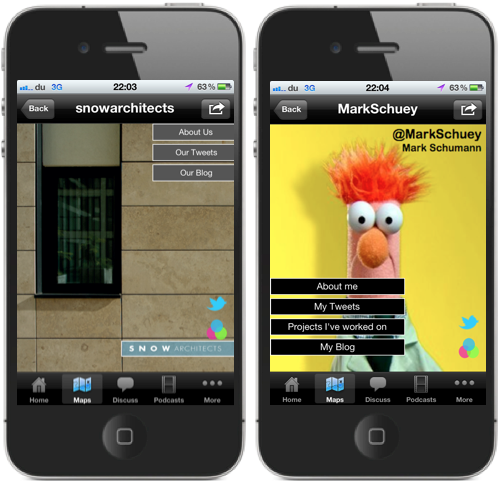 A MiniApp is an iphone app we build inside the ArchitectMap iphone app.

Users with a MiniApp have a green pin, and can add a splash page, about us page, twitter feed, projects map and links to their blog, youtube channel etc.

The project map is particularly useful as you can show in a very compelling way where you work and the sort of work you have done there. It is very flexible for other uses too; I use my mini app map to show where my upcoming Linkedin training workshops are.

Mini apps aren’t free – they start at £5 for individuals and £20 for companies at the moment, but they are free to graduatemap members, and they do represent an extremely cost effective and very simple way of getting your own iphone app. Want one?

View more presentations from Su Butcher
Want to join the map? No problem – go to ArchitectMap.net and Click Join the Maps – or go straight there.

So where do we go next with the ArchitectMap?

As it’s a crowdsourced project, we thought we should ask you. We’d like to know how you use the map, how you’d like to use it, what suggestions you have.

Let us know what you think anywhere where we are online, we’d love to hear from you.

The govt are trying to cover up the truth