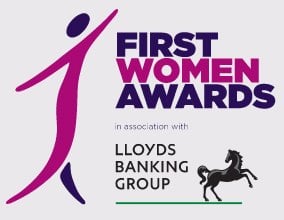 On Wednesday I’ll be attending the First Women Awards as a guest of my client COINS Global, the construction software company who are sponsoring the Built Environment Category. This inspired me to revisit the old topic of Women in Architecture, a subject that has been of interest to me since I began my architectural career, and which has recently been rekindled by the Architects Journal Women in Architecture survey and campaign.

At the end of 2011 (the latest statistics available) the ARB say 33,456 architects were registered as architects with them, (just under 30,000 of which are based in the UK). This figure hasn’t changed much in 20 years – throughout the 1990’s there were 30,000. The proportion of women is still woefully low. In 2000 the register (including oversees registrants) was 12.3% women. ARB says it is 21% at the moment, but I question their maths – here is a screenshot of the annual report page 23:

If the number of female architects on the register is correct as well as the total, then women still only account for 20.7% of registered architects, a rise of 1.7% from 2010.

If the number of male architects on the register is correct as well as the total, then women only accounted for 11.7% of registered architects at the end of 2011. It would be interesting to know the actual figures.

I’ve plotted the figures I’ve been able to extract from the reports dating back to 2000 and they look like this, assuming that the 20.7% is right and the number of male registered architects in 2011 was actually 26545 not 29545. 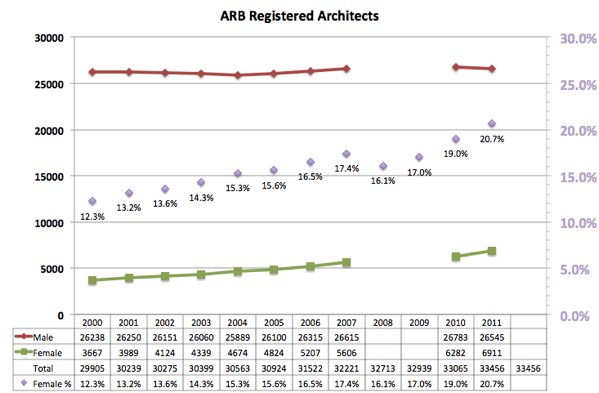 Notes on the figures:

In 2007 the ARB didn’t give actual male/female figures, just the percentage, so I have extrapolated the breakdown from the total.

In 2008 the ARB stopped giving percentage rates for the whole register and just gave UK and Northern Ireland numbers and percentages (broken down by country). Adding these up and comparing them gives the lower percentage rates shown for 2008 and 2009.

I can’t find any reference in these annual reports to the actual total percentages for the whole register. At this time, the ARB preferred to report the demographic of the additions to the register – new architects, which were running at 37.2% in 2008 and 36.6% in 2009. It is, however rather disappointing not to be able to have the actual figures to compare.

At this time Mirza & Nacy were reporting that 25% of working architects were women, but I find that hard to believe looking at the annual reports. Mirza & Nacy (whose data come from surveys not from a view of the whole register, by the way) then went on to report a 5% drop in the percentage of women architects in practice from then to 19% in 2010.

Then in July 2012 when the ARB report for 2011 was published, the Architects Journal Reported the rise in the proportion ARB registered architects from 2010 to 2011 as a 2% rise.

But we’re not the only ones. The numbers of women in the construction industry generally is dreadfully low, as Noble Francis pointed out last week:

ONS #employment by #gender stats. #Women account for only 12% of employment in construction.bit.ly/16H4LEX twitter.com/NobleFrancis/s…

@cnplus_kim if you think that is shocking, #women are less than 1% of employment in electrical contracting. #gender tinyurl.com/m5a6ew7

Given all of this, it is good to be celebrating the achievements of women in the built environment, and construction in particular.

The shortlist for the 2013 First Women Awards Built Environment Category is as follows. Given the background for women in our industry, their achievements are even more impressive.

The awards will be presented on Wednesday 12 June at the London Marriott Hotel, Grosvenor Square. I’m hoping to tweet the result, signal permitting, but you should follow and engage with the folks at @COINSGlobal for updates and to discuss how we can get more women into our industry.