The Rising Star award was launched last year in memory of sustainability maven Mel Starrs who died suddenly in 2012 aged just 38. Mel was a prolific blogger who made it her mission to take apart policy and regulation, and campaign both online and off for a genuine sustainable future for the built environment. The award, founded by the UK Green Building Council and PRP Architects, Mel’s former employer, seeks nominations for individuals who have picked up the baton, acting as a catalyst for change in their work and elsewhere, engaging and stimulating debate in the industry.

This Wednesday I spent the afternoon in a room at the UKGBC’s offices, discussing the shortlisted candidates for this year’s Rising Star Award for Sustainability in the Built Environment.

I thought I’d take the opportunity to share with you some of the content of the candidates’ submissions, which give a fascinating picture of how some of the best minds in sustainability think we need to take the agenda forward.

The five shortlisted candidates were announced this morning, and are:

Carolina first cut her teeth on sustainability as project Architect for the M&S Cheshire Oaks project but in 2013 moved to BAM’s Sustainability Team to work on the new Google Headquarters in London. This is one of the most demanding projects in terms of sustainability, which has involved a huge supply chain and a host of targets including the highest levels of BREEAM and LEED, zero waste, low embodied impact, energy efficiency, indoor air quality and complete transparency from materials suppliers.

The experience of working with Google has reinforced Carolina’s view of sustainability as ‘intrinsic to everything we do’. She also sees health as a key motivator for sustainability in buildings. Carolina feels that ‘we are far from building healthy environments’, and wants to encourage greater transparency in the supply chain to help remove unhealthy materials and constituents from our building processes in the future.

Martin, whose consultancy Fairsnape will be known to many of you, has spent several decades in the construction industry, first as a project manager for main contractors, but for the last nine years as consultant and advocate for improvement in the built environment. This has led him into many roles including chair of the Lancashire Best Practice Club, founder (with three others across three continents) of Be2Camp, the collective to advance social media and collaboration in construction, and this year as the first UK ambassador for the Living Building Challenge.

The Living Building Challenge is the ultimate sustainability standard, focusing not on incremental improvements but on the ambition of an ideal standard designed to push us to achieve more. Having launched the Living Building Challenge Collaborative in the UK with GreenVision in Leeds, Martin is supporting emerging projects and promoting the Challenge and the concept of Restorative Sustainability, putting back more than we take out. “Just think,” he says, “if this was adopted by construction companies, embedded in their policies and culture, how it would change sustainability in the built environment?”

For Phil Birch, sustainability is about preserving the environment, building better communities, and not least, economics. With a background as an engineer, Phil works for cost consultant Sweet Group as associate director. He’s therefore very keen to make the business case for sustainability, and has been involved in this role in influencing government policy and working with bodies like the UKGBC, for example on their report on retrofit incentives, and WRAP where he’s created several toolkits including the Designing out Waste in Civil Engineering Toolkit. He’s written and presented on this topic many times, including for Building, and will be speaking at Ecobuild on ‘Unravelling domestic energy efficiency.’

Communication is central to how Phil looks at the challenge of delivering a low carbon future. He’s identified the disconnect between Government and industry as a major barrier and seeks to mediate between all parties with different perspectives. “I don’t think society deliberately intends to be wasteful, greedy or to consciously impact climate change,” he says. “My feeling is our environmental impact is mainly lack of awareness…it is essential to help individuals understand the benefits of being resource efficient and to appreciate the influence they can have.’

Steve began his career in construction as an apprentice carpenter, and now works at Willmott Dixon in their Re-thinking team, a specialist sustainability consultancy within the business. Always a problem solver, Steve’s achievement in the last year has been to get the timber industry on board a new venture, the ‘Grown in Britain’ campaign to increase the market for homegrown timber. This umbrella body was launched last October and has widespread support from major organisations across the supply chain.

Steve is clearly yet another great communicator in our shortlist. He’s helped get so many stakeholders on board for Grown in Britain by looking at the reality of the supply chain situation, listening to their concerns and helping identify ways to move forward. “I love the fact that sustainability professionals all recognise that it is about long-term collaboration and inspiring others rather than short-term competition,” he says in his submission.

Our fifth candidate, Wilf represents a fascinating group of individuals I’m coming across more and more, people that the recession has attempted to throw out of the industry but who have ignored that challenge and ‘done it anyway’. Trained in architecture, Wilf now has his own consultancy Studio BARK with a collection of projects under his belt, but also gets involved in many different activities such as Architecture for Change and OnGreening, for whom he’s working on their Ecobuild pavilion. Wilf’s latest achievement is Springfield House, a low cost, low impact and low energy, but high design quality Code 6 house in the countryside. The project is starting on site and will be filmed for Grand Designs.

Wilf is a passionate believer that performance should not wipe out the poetics of space. Instead he’s looking for ways that low impact materials can be used more, and thinks the government should incentivise local sourcing of materials. “In addition to the economic benefit to both client and developer,” he says, “local sourcing keeps the money in the local economy, rather than sending it abroad.”

So who will be the 2014 Rising Star? The shortlist was announced this morning and next Wednesday at 7.30pm the winner will be announced at the Ecobuild UKGBC joint birthday party at the Crystal in Docklands, when you can find out.
http://www.ukgbc.org/news/rising-star-award-2014-finalists-announced

But I’m more interested in all our candidates as people. I want to get them in a room to debate the economics of sustainability, how we make buildings truly healthier and start putting back rather than being ‘good enough’. Which is what Mel would have done with them, probably in the pub over a glass of wine.

Find out more about the Candidates in Video Form

One of the things we asked the candidates to do was record a one-minute video piece to camera for us, answering the question, ‘If you had one minute to talk to the industry, what would you challenge them to change?’ 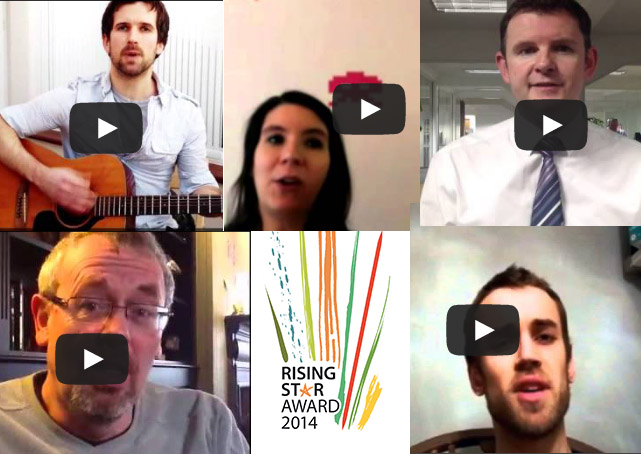 You can see the videos on Mel’s blog, where Mark Fretwell, Mel’s former partner, has posted them up. You’ll notice that we asked the participants to focus on the message they wanted to convey, not the production values, so the videos are raw, honest evidence of real people working to make a difference in our industry.

Next year I hope we can widen the entries much further. I’d like to see more candidates from

All these sectors are pivotal in how we become a more sustainable industry. If you know people who should be recognised for what they are doing, keep an eye out in the autumn when we’ll be looking for them once again.

FOUR ticket inspectors putting their hands on the neck and body of a child…. And he was the one who had his pass. Imagine.

His younger brother is in handcuffs at the back. Turns out he forgot his pass in his coat at his grandmas house. 2/n