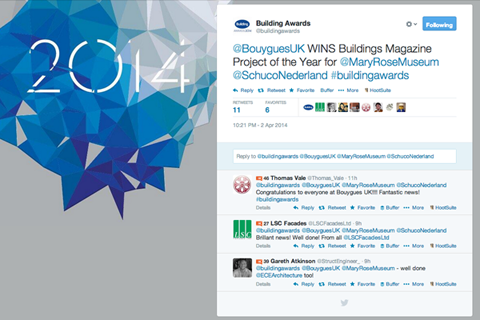 Ok so its not a big thing right. It’s twitter.

Well yes, it is a big thing, it’s the Building Awards.

The Building Awards ‘celebrates and rewards excellence and outstanding performance in the UK construction industry’. As far as I can tell it is one of the biggest construction awards nights of the year in the UK.

Held at the Grosvenor House Hotel in London, the 2014 Building Awards which were held last night attracted over 1200 people, who were entertained by Rory Bremner and awards presented by James Corden. A bit like the Brits for UK Construction then.

And it was big on twitter too – 816 tweets sent by 313 contributors to date and counting, as I ran a report this morning as people were just travelling in to work. No doubt the hashtag #BuildingAwards will be used a lot more in the next few days.

So its big. But the problem is, if you were following the specially created @BuildingAwards account hoping to see the winners, you wouldn’t have seen the winning announcements in your home stream, at least, not most of them.

Here are a selection of tweets from the @BuildingAwards account announcing the winners as they were announced on the night.

One of the first awards to be announced was Turner and Townsend’s award for Consultant of the Year. Here’s the tweet.

So great for Turner and Townsend and all their followers (who also follow @BuildingAwards) but not so good for anyone else wanting to know who wins the awards.

When I noticed this mistake by the team running the @BuildingAwards twitter account I tweeted them about it, but they didn’t reply. Either they were too busy or the tweets were scheduled in advance (which would be a bit risky!). In any case they didn’t change the pattern for any of the corporate winners. If they had a twitter account, the username went right to the front of the announcement.

This only changed once the individual awards were announced like this:

What is the effect of this mistake? Difficult to tell. The @BuildingAwards account has over 4000 followers, but only a proportion of them follow each of the finalists – why would they?

Of course if you were following the hashtag you’d see all the tweets that included it, so that was a way round. But it seems to me to negate the point of having a dedicated twitter account to announce the winners if your followers won’t be able to see the announcements.

Next time you send a tweet with someone’s @handle in it, think about who is going to see it. Then my work here is done.

PS I first wrote about this phenomenon back in 2009 with a post called ‘Twitter: How to Reply’.

PPS If the @BuildingAwards team would like to learn more about how to use twitter properly and effectively perhaps they might like to come along to the Twitter for Professionals workshop I’m running about it at the Building Centre on 29th April. Or perhaps not!

PPPS Congratulations to all the winners!

Monday. Meeting colleague. No show. She had Covid.
Wednesday. Graduation dinner. Cancelled. Guest of honour had Covid.
Today. Travelled to a meeting. Serious delay. Rail staff shortages due to Covid...
How many ways has your life been disrupted due to Covid this week?