My good friend, cartoonist Simon Ellinas shared this video today and I think its stunning. It is the author and visionary Arthur C Clarke being interviewed by the Australian Broadcasting Corporation in 1974 about the computer, and what it will be like in 2001.

In the video Clarke stands in a room which houses a computer (yes all those cabinets are part of it) and predicts not only the personal desktop computer, but also the internet, explaining how in 2001 the ‘…businessman will be able to live anywhere in the world he wants and still conduct his business’. He mentions viewing bank statements and buying theatre tickets using his computer.

The viewers of this programme must have thought he was bonkers! 1974 was the year of the Three-Day Week. Yet it is uncanny that 40 years after this video was made, how much of his incredible predictions ring true. He didn’t predict the advent of the business woman though, at least, not in this interview.

However what I’m more interested in is this. If we looked ahead to 27 years from today, what will life be like then? In construction, this type of visioning is being led by the Construction Industry Council (CIC)’s 2050 group, and their sister group BIM2050.

CIC 2050 Report Looks at How We Feel Today

The CIC 2050 group ran a survey this year to ask if people are satisfied working in the construction industry and what inspires them. The survey covered four themes:

You can read the report here.

I’m interested how the survey results picked up a consensus within the industry that social media is not being used properly in the construction industry (60% of respondents agreed).

Over half the respondents thought that social media could be used to help overcome some of the challenges the industry faces, including 67% thinking it could improve the image of construction.

The ways Social Media could be used mentioned in the report include:

In contrast however, the authors report “A polarised view of social media” between positive and negative. Negative comments they quote include:

“Social media is largely trivialising…I’m not sure that it helps with an issue like this.”

“I don’t think it is relevant or to be encouraged in a work environment. It is highly unregulated, unmanageable and a potentially serious risk to reputation… Being bombarded with information, most of which is not relevant to you personally, is one of the main pitfalls and drawbacks of modern communications systems. No- one even gets email training, let alone social media training, so it is ripe for misuse and abuse.”

Now of course I could correct both the assumptions made above, but that isn’t the point. These are commonly held views in our industry today. On the other hand the report’s authors quote a respondent full of enthusiasm:

“The public are fascinated by construction. We need more videos and photos ‘behind the hoarding’. There could be YouTube videos of projects showing how things are done, and why things are done in certain ways. Photos of sites, images, progress, project Facebook pages where ‘boots on the ground’ can upload their photos. Sites could have videos on the internet showing what the project will achieve, how it will be done etc. It is great for stakeholder involvement, manages their expectations and gets them excited about how the project will benefit them.”

I imagine when the speakers with the negative view of social media read the report (if they did), the concept of someone posting directly photos off site onto a facebook page would fill them with dread! 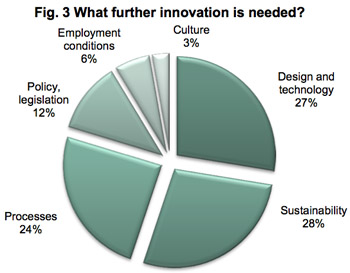 This certainly chimes with my experience. I think the younger generation take sustainability more seriously, and as millenials, will have grown up with the computer in a way that our more senior colleagues have not. What interests me is how when the next generation enters the world of work over the next five years, whether their use of social media in their social and school lives will translate into their use of it at work, and how enormous the potential for improving communications will be if it happens, and how the industry will cope with its fears and benefit from the outcomes.

In contrast the BIM2050 group have produced a report into what interdisciplinary working might look like in 2050, and they are really gazing into the future, thinking about what a construction industry would be like, that would adopt a digital-led, data-driven approach to education, technology and culture.

In essence they are leaping over the short-term concerns such as social media and its potential positive or damaging effect on the world of work, and looking straight into the eye of a future where construction embraces and is changed by that new digital world that is already upon us and is only going to grow.

When we look ahead like this, the question is no longer about ‘BIM or no BIM’ or the potential of 3D printing. It is about a complete cultural change in how our industry works, driven by the way the world is changing and in particular by the lives of the people who will very soon make up the new construction industry.

The Future is Now

The immediacy of some of these changes was brought home to me again this week by a post on the G4C (Generation for Change) blog about Minecraft. G4C featured very heavily in the Constructing Excellence conference this month, where they helped predict the future of the industry from the perspective of young people. The blog describes the virtual worlds that the computer ‘game’ Minecraft creates, and how they can be built and changed by participants collaborating all over the world. 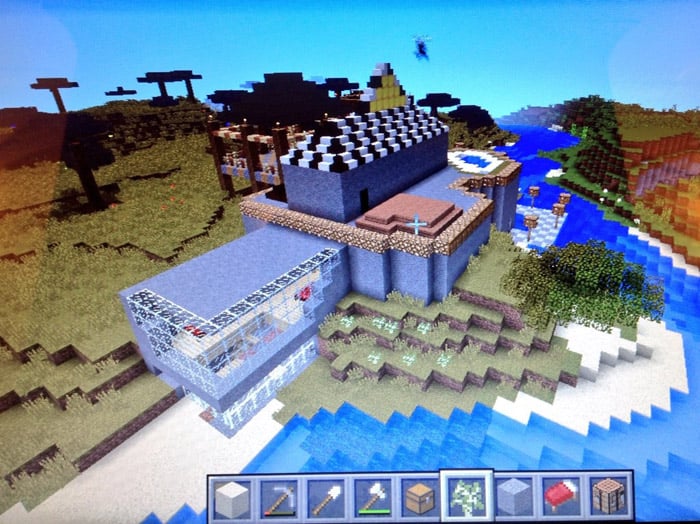 This is happening now, as we speak, in homes all over the country including mine. My 10 year old son spends several hours a week in virtual minecraft worlds like the one above, collaborating with his friends from school and with others across the globe to make, explore, play in and change worlds they create in Minecraft. When these young people (many of them between 9 and 16 now) enter the industry, and I hope they will, their attitude to collaboration, cooperation and communication will be so much more mature than ours.