One of the things about getting older is things seem to happen faster.. as a child the wait for birthdays and Christmas seemed like an eternity… now they come around quicker than I care to think about. My last years in the police service seem to be speeding up and here we are once again with what is now the 4th #DontStreamAndDrive Day.

Well anything that stands still and always stays the same never evolves and this campaign is no different. The big ‘rallying’ point the campaign has used over the years to get people involved was Thunderclap. This allowed people to pretty much sign up and forget. The Thunderclap application did the rest. This meant the user didn’t need to remember to post content on the actual day and I could rest easy that each sign up was another social post. Well things changed at Twitter during 2018 and a casualty of that was Thunderclap. So this year, in an attempt to evolve and do things differently, I created a media pack and sent this out to every police force, ambulance service, fire and rescue service, road safety organisation and all the other businesses that have previously supported the campaign. This is a new tack and will rely on the good will of all those agencies to either schedule content or take a pro-active role during the day. Only time will tell… but one thing is for certain…. by Weds the 17th we will know if it worked.

As in previous years I have had some fantastic support. Many organisations have replied to say they will be involved. Some are already posting content. I’m also extremely grateful to every single individual who also supports the campaign in their own way be that retweeting messages, offering me encouragement and getting involved in conversations.

There are two other big thank you’s I need to make. The first is to Su Butcher. She has been a long term supporter of the campaign and this year, through her company, has provided me with a slot within her social media tracking software. This allows us to see how well the hashtag is progressing. As can be seen below, we are doing rather well already. 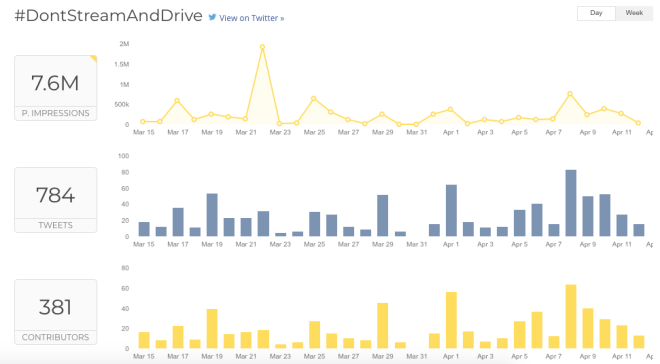 The second goes to my friends over the USA at LawEnforcement.Social – The timing in many regards couldn’t be better. The #DontStreamAndDrive date is always set with the agreement of the National Roads Policing Intelligence Forum here in the UK. This year, as in previous years, it falls within a national mobile phone campaign to supplement the great work being conducted across the country. April in the USA is distracted driving awareness month. So distracted driving is the topic of the month from one side of the Atlantic to the other. What a great opportunity to get involved.

The team at LE.dot.Social have created this fantastic resource of information for law enforcement in the USA and beyond to help tackle distracted driving.

In very simple terms the campaign message has not changed.

So lets dig into a little bit of information.

Distracted driving is not something new. It has always been there from rubber necking to messing with the stereo, lighting cigarettes, drinking/eating and even children. The mobile phone has simply added an additional distraction to already overloaded drivers. Mobile phones have become an extension of our hands and so normalised to us that many drivers are oblivious to the dangers. Our lives are becoming increasingly digitally orientated. The plethora of social media platforms, chat services and other applications are all calling for the users attention and FOMO* has become a very real issue for many.

It stands to reason that some people will engage in this behaviour behind the wheel. A short glance to read a notification can lead to tragedy but live and recorded video has become very popular and is increasingly leading motorists to record footage whilst driving.

* fear of missing out

Based on 2017 KSI figures in the UK, 3 people are killed or seriously injured every hour on British roads. [1]

A National Safety Council white paper concludes drivers using mobile phones have a tendency to look but not see. (sometimes referred to as ‘Inattentional blindness’). Estimates indicate distracted drivers will see up to 50% less than an undistracted driver [4] – see case of David Wagstaff where inattention blindness was cited by the defence;

Drivers who use a mobile phone whilst recording/livestreaming will;

I am totally convinced that distracted driving engendered by mobile phone use is our new drink drive. 50yrs of campaigning and drink driving is still a problem. Much less than it used to be but still there. The use of mobile phones by drivers is heading down that road and will take us decades to correct. In my view, this has, to some part, been assisted by legislation that has conditioned drivers to believe that handsfree is ok. Evidence from TRL in 2002 proved this was not the case.

This has engendered a situation where some people who are not holding their phone whilst livestreaming will claim they are legal and not breaking the law. This is understandable but totally overlooks the need to have your mind focussed on driving and not on a live broadcast and entertaining your viewers. You don’t hold a nail and hit it with a hammer whilst looking in the opposite direction.

As as highly regarded and respected criminologist said to me recently.

The argument between legal and illegal phone use whilst driving is, in very simple terms, the difference between dying legally and dying illegally.

Distracted drivers are on our roads. They are in the car in front of you, the car behind you, the car alongside you and the car going the other way. They put you, themselves and every other road user at increased risk.

I encourage you to get involved on Tuesday 16th April. Post some content. Post a message that is important to you about road safety and how you feel about the dangers created by streaming drivers. Talk about the dangers of mobile phone use behind the wheel and share images, videos and news stories.. or just get a hold of my messages on the day and RT, share or better still… copy them and post as your own. Just make sure you include the #DontStreamAndDrive hashtag.

I will be live on Facebook throughout the day with friends from Blabbing for Britain talking about the campaign and you will be welcome to join us.

In the 3 years that the #DontStreamAndDrive has been running it has totalled a potential reach of over 100 million people. With your support on the day we can push that message further and help people understand just how dangerous using a phone whilst driving can be and even more so when recording/broadcasting video footage.

I welcome and value the support of everyone who gets involved and I hope you can join me on the day in helping to make our roads safer for everyone.