Live blogging of events is a very powerful tool, I thought I’d share you some results from my last sortie.

The latest event I live blogged was the Workplace Trends 2012 conference that took place in Allen and Overy’s offices off Bishopsgate in London on 25 October.

This was the second year I’ve been involved with Workplace Trends, and as someone from within the construction industry but outside office fitout and workplace design, I find it a really interesting forum to watch from a distance.

There are the academics, who are carrying out complex research into human behaviour and preferences, like Pawel Wargocki of the Technical University of Denmark, trying to understand the relationship between how people’s internal environment changes and how they feel about how it affects their performance.

Then there are the clients, who take a leap of faith to implement a wellbeing strategy for their employees without knowing for sure whether it will bring any commercial benefits whatsoever. They were Ginsters, and it did.

There are the practitioners like Johnson Controls who are hoping to understand how the next generation of workers (if they get a job of course) can bring their skills in being digital natives to the workplace (wherever that is) and how businesses must change their workplaces to accommodate them.

And there are the visionaries who come from the HR coalface like Doug Shaw and Neil Usher, who challenge us to think of the people who are using the spaces we design and what really matters to them, not least the culture of the organisation.

A gem nestling in the graveyard after-lunch slot is the annual debate in which Paul Morrel, the government’s chief construction advisor, plays devils advocate and speaks against a motion everyone would be in favour of. As usual his talk was very funny and his slides were very rude, which kept everyone awake. As he wanders all over the internet to collect his images, I haven’t been able to share his slides with you, but the rest of them are embedded in my Storify report on the event.

View the Storify of Workplace Trends 2012

So, what is the result of this endeavour?

As I stressed in my blog post last year about Live Blogging and why it Matters, having a live blog of your event, and tweeting about it, involves people in the event preparation and makes it possible for them to be there in some way during the event, whether or not they can attend in person.

Having had two years of activity I can look back and see the effect greater preparation has had on the Workplace Trends audience.

In 2011, 170 people viewed the live blog (which I built using CoveritLive) and the page on my website was viewed 582 times.

So far this year the live blog (which I built using Storify) was viewed by 302 people and the live blog page on Just Practising has been viewed 592 times.

I’ve concluded that Storify is a better live blogging platform as more people are reading the live blog itself, rather than just loading the page. It may also be that the larger audience is due to the larger volume of traffic overall. 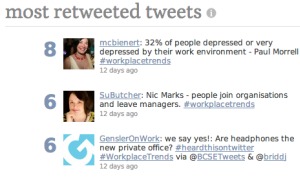 Most of the traffic of course happens on the day and this is down to twitter. Twitter traffic has been much better this year, and part of this is due to the increased activity of participants, particularly inside the conference, on Twitter.

Last year 557 tweets were sent using the #workplacetrends hashtag, by over 80 different users.

This year 613 tweets were sent using the hashtag, but these were sent by 122 contributors, and over the week of the conference, 105,944 twitter accounts were reached by the hashtag tweets, resulting in over 2.7 million impressions. Some tweets were shared (retweeted) 6 or 8 times. We had participants from as far afield as the US, Canada and Malta.

Whilst the statistics only monitor the #workplacetrends hashtag I can see from the conversations online that many more tweets are sent in follow up discussions without the hashtag, and therefore the exposure of the conference is likely to be greater than these statistics suggest.

The reach of this event is the furthest I’ve ever managed, but more importantly because Workplace Trends wanted a live blog too, they have an asset that will be accessible and drive traffic to their site for many months yet.

The live blog forms a lasting record of your event, one that people can refer back to as an aide memoire, find via search, dip into when they want some inspiration. This is good not only for the organisers who will attract more attendees, but also for the speakers and participants, as their work gets a larger audience over a long period of time.

If you’d like me to live blog and/or live tweet your event, why not get in touch?

Anne Marie McEwan on Social Business is Catching – or is it?

Neil Usher Writing on the Leesman Index Blog: Sound workplace strategy is about people, not buildings

Let me know if there are others I’ve missed, I’m sure there are.