Last Tuesday I live blogged the Government Construction Summit, organised on behalf of the Cabinet Office by UBM Built Environment and Building Magazine.

Last year’s Summit saw the announcement that centrally procured public projects should be level 2 BIM-enabled by 2016, which caused quite a stir. This year the summit looked further ahead to 2025 and the launch of Construction 2025, the ‘Industrial Strategy for Construction’, a document setting the agenda for a collaborative commitment between Government and the Construction Industry. This document set out four main targets for 2025, and launched the 30-strong Construction Leadership Council that will drive forward the implementation of the new strategy.

Live blogging such a big event, with over 150 delegates and a national audience, was a first for me. Whilst I’ve blogged events involving the Cabinet Office before (the launch of BIM4SMEs Working Group) the interest in this subject was going to reach throughout the industry, and beyond.

This post will look at the effect that taking such an event online (albeit through the somewhat limited medium of a live blog and Twitter) had on the audience, and what the data collection we’ve done might be able to tell us about the subject, the medium and how construction is using social media today.

A Note about Tools 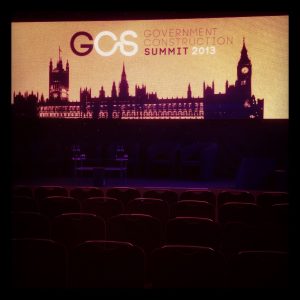 The Live Blog is a selective curation of activity at the event (which took place at the Park Plaza, Westminster Bridge in London) and activity online, including online publiciations, websites, slide decks and twitter. By bringing together this activity it is hoped that people who (for whatever reason) could not attend the event, could still get a flavour of the summit as it took place, and that non-users of social media can get a flavour of what was being said online by people both within the room and elsewhere across the country and beyond. The live blog was built in Storify and embedded in the Building website to encourage non-twitter users to take a look.

Twitter use was tracked using a TweetReach Tracker and also using Martin Hawksey’s open source TAGS tools for community analysis and visualisation. The TAGs tool archived all tweets using the #GCS2013 hashtag and the TweetReach tool tracked tweets including one or more of these terms:

“Government Construction Summit”
#GCS2013
“Industrial Strategy for Construction”
“Construction 2025”
and Tweets by and to the @GCSummitUK user account set up specifically for the summit.

Here’s a summary of the main statistics from the Live Blog and Twitter since Monday 1st July 2013.

Below is a screenshot of the figures just for 2nd July itself showing a peak at 10am when the strategy was published online.

So what were they doing, and what does this tell us about the use of Social Media in Construction? Here are some thoughts of mine based on the information I’ve collected. 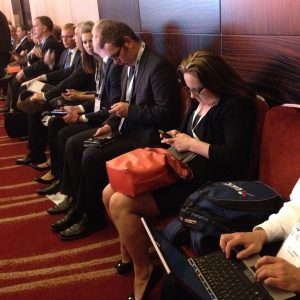 The audience in the room exceeded 150, but even so I suspect fewer than 50 were using twitter. However on the day itself 577 people tweeted, and there were 157 people tweeting at the 10am peak, just after the Strategy document was published.

We know that due to the prevalence of social media in society, that by making a launch visible online it is possible to involve an online audience far beyond any conference room or press briefing, to spread the word. We also know that this is clearly true in construction just as much as in any other sector of society. There is a significant group of construction professionals on twitter who are talking about professional issues.

Over the six days since the tracking began, the summit and the subject of a new Industrial Strategy for Construction has reached a huge audience of over a million twitter users. These users include all the people who are following any one of the 755 accounts that have tweeted about the event, so not just the government’s accounts, not just the news media, but also, for example, this anonymous user who only has three followers, but is also asking a question many others are asking.

Vision for construction at #gcs2013 is all well and good but what happens if we can’t make the stuff that goes into buildings? More imports?

People far beyond the construction industry are hearing about what the industry thinks about the strategy, be it simply by listening in to conversations or by following links to blog posts and opinion pieces. Twitter allows both the message and the views about it to be shared and commented upon, and to be listened to and investigated, by anyone who chooses to have an interest.

When I wound up for the day at around 5.30 on Tuesday, I tweeted some stats that were published in Building. These were that 508 contributors produced 2077 tweets reaching 849k people with 7,500,000 impressions.
The figures now are up by approximately 25-50% a few days later. 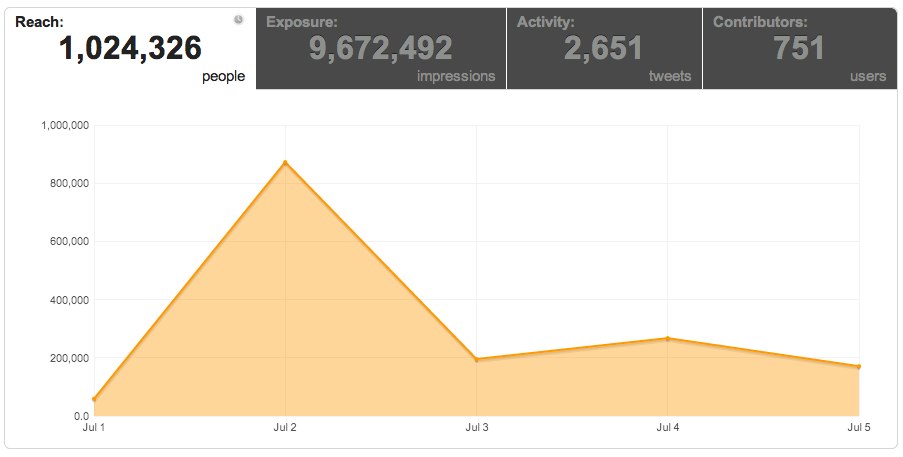 Looking at the tracking software we can see a huge spike on the day of the launch (Tuesday), a somewhat subdued volume on Wednesday, but another wave of tweets on Thursday. As attendees at the event began to blog about their views, as organisations produced their own statements, and as the media began to publish their follow up news articles, new waves of content are created, generating more tweets and introducing a new audience to the subject. Even on Friday over 170,000 twitter users were still seeing tweets about the strategy. You can see some of the blog posts and opinion pieces I found over on the last few pages of the Live Blog.

4. We Can’t See Everything

The trackers are only picking up the tweets which include the hashtag, or which mention the search terms listed above. What they don’t show is that many more hundreds (or maybe thousands) of tweets were sent in reply to those tweets, without using the hashtag or the same terminology. For example, in this conversation, the protagonists are assiduously sticking to the hashtag (click here or on the image to view more of the conversation on Twitter): 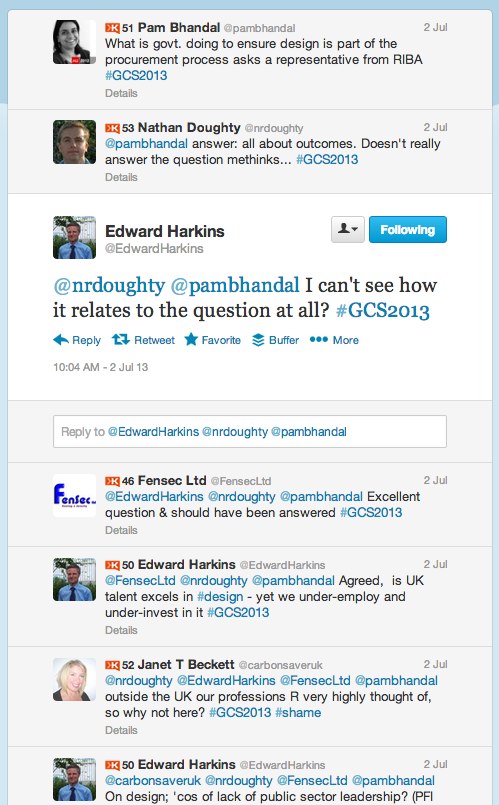 Whilst in this one the hashtag comes and goes – click here or on the image to see the full conversation: 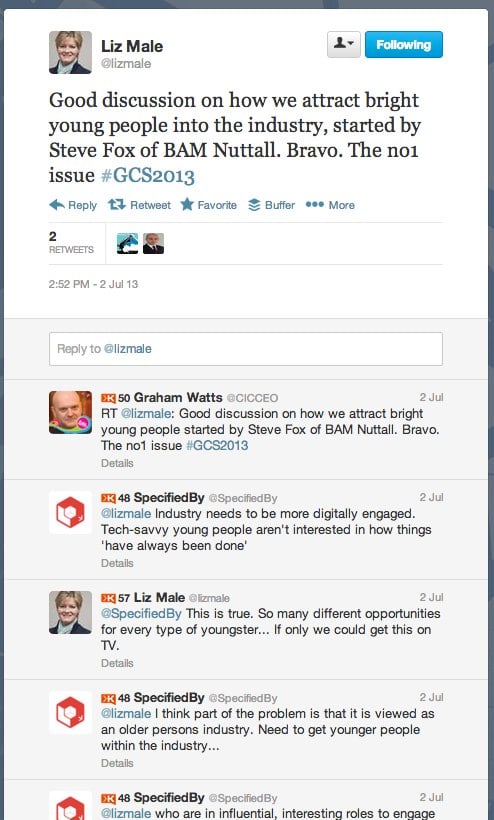 And of course many conversations will not have been picked up at all by the trackers.

Of course this means that the audience was no doubt even bigger, but more importantly it indentifies the limitations of these tools, that we cannot hope to see everything with them, but simply to get a glimpse into the effects of our activities. People will come across these conversations by a whole range of different pathways.

Take a look at the Data

You can see what we did manage to record here:

You can Read the Live Blog – this is my record of activities on the day itself together with some blog posts and articles after the event.

You can Search the Archive of Tweets using the hashtag – drag the sliders to choose a particular period or search for a user or other term:

And you can View the Interactive Visualisation of tweets using the hashtag – note the limited conversation arrows show that it wasn’t used nearly enough in replies! Click on a node and then click ‘Replay Tweets’. 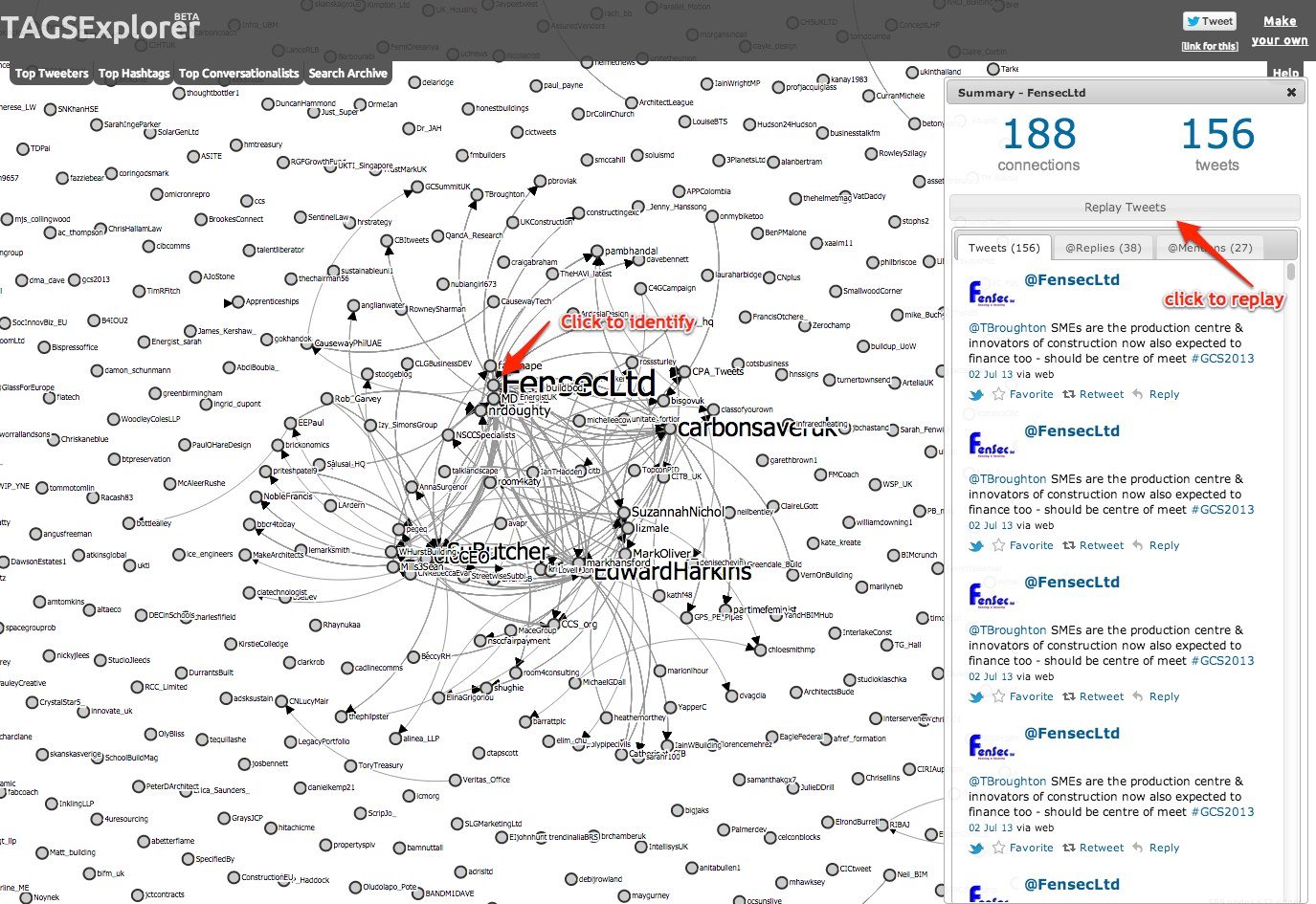 What Was Your Experience?

One of the objectives of Live Blogging an event like this is to make at least an essence of the event available to people who, for whatever reason, cannot be there. This is always a challenge and limited – there is no substitute for being there. But on the other hand, I feel that these days there’s no substitute for being on twitter as well – in some ways this is where some of the most important conversations are happening.

What do you think? What was your experience? Were there conversations on Twitter that weren’t taken into the room or issues that didn’t appear on the Live Blog? Please share your thoughts in the comments below. And if you want to know more about the data, please ask away, we’ll try to answer your questions.

Many thanks to Tom Broughton of UBM for inviting me to live blog the summit, to the team at UBM and the Dept of Business Innovation and Skills for assisting with advance information, and to all those of you who took the time to participate in the discussion online. If you haven’t already, what’s stopping you?

Just spoke to rep from nat’l bloodwork lab & asked if they’re working from home or back in office.

He said, “Still working from home. We’re in healthcare so we know what’s going on, & it’s not safe to go back now. This’ll be the case for a long time.”