Last week’s NBS Construction Leadership Summit 2020 promised much and didn’t disappoint. Most importantly some of the best sessions were interactive. There was almost a conference-like feel about the event, with speed networking and private chat spaces, though probably a lot less alcohol!

Interactivity online and at events is important because it is here that the content is dissected, digested and debated. It is in the conversations about the presentations that the real sense of meaning is taken away, and where behavioural change may begin to emerge.

I’ve always been drawn to the concept of a critical friend, one who you invite into your space to give their perspective; critically, honestly and sincerely. I’ve done the job myself for many years in the field of digital marketing, being paid – not to write, or post, or amplify (whilst I do all those things) – but to give a perspective that otherwise would not be heard. One of my clients once told me ‘we pay you to tell us what we are doing wrong’.

There were several critical friends at the Construction Leadership Summit last week. First there were the official ones – Dame Judith Hackitt being a prime example. No one can doubt the sincerity with which she said,

Day two of the summit served up two experienced critical friends from within the industry – Paul Morrell and Professor Phil Bernstein. Between the two of them they picked apart what had happened to construction in the last ten years, focusing on the optimistic but ultimately failed BIM mandate. Their forensic analysis was further amplified in the Q&A they shared with the audience, acknowledging that things had changed, that the industry had adopted information modelling in a different way to what was envisaged, and trying out ideas about how we could get to where we need to be from that new perspective. 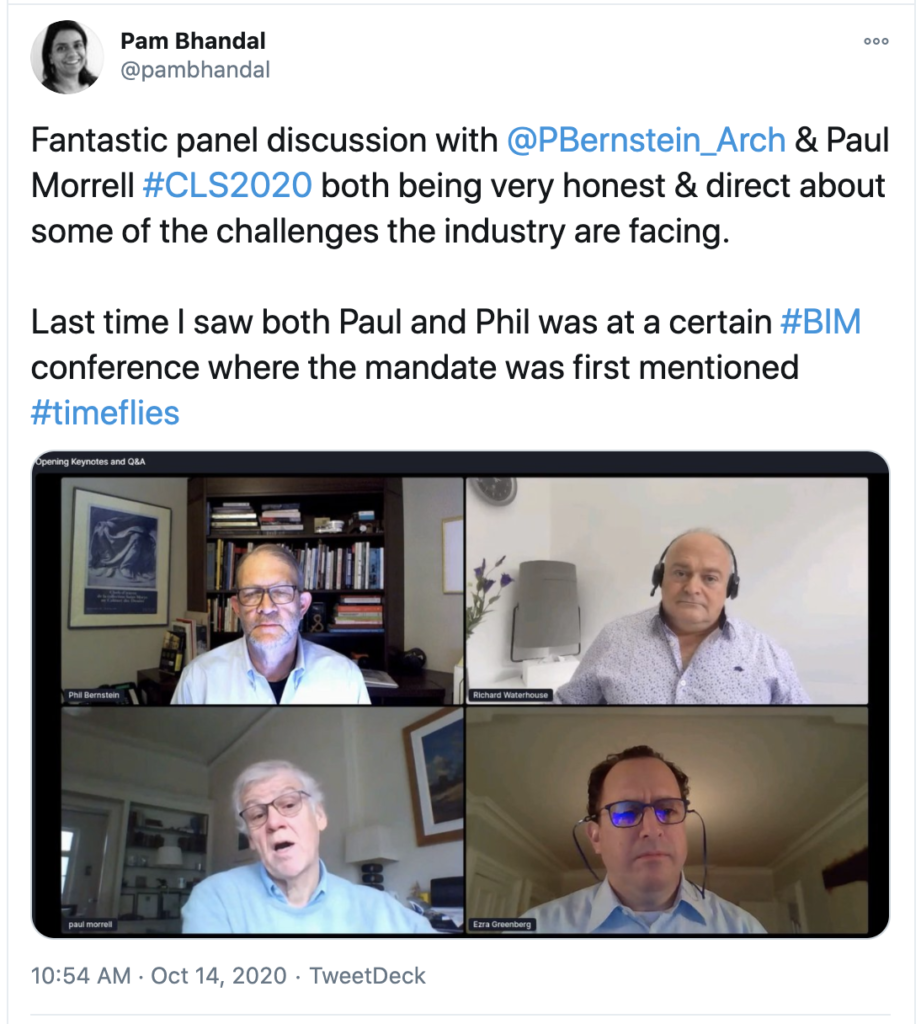 Neither Morrell nor Bernstein has the whole picture of what is going on in construction. They aren’t at the coal face. But what they do have is perspective, and sincerity. In all things, a critical friend needs to have a sincere belief that things can be better, and that by shining a light on the problem from a new direction, they can help identify ways out of the darkness.

Being a critical friend is a difficult task. You are not ‘right’ and they are not ‘wrong’. You don’t have all the answers. What you offer is another way of looking at things that the person might not have considered. Bringing critical friends into your space is hard too. No one likes being criticized, having their mistakes exposed. However, identifying failures is the first step to learning and improving. Fail more, fail better, as the saying goes.

None of us know everything, but

One of the challenges we face in construction is the complexity of our industry. From complex electrical circuitry to complex construction technology and complex fire regulations, none of us know everything, even about our own area of operations

Before lockdown I attended the launch of a new initiative to develop off site manufactured schools. After the talk I chatted to the project lead and was surprised to discover that she had never heard of CLASP, the post-war modular manufactured schools programme of the 1950s, 60s and 70s. Many (but by no means all) of the challenges this new initiative would face would have been faced by others in the past. Examples like this serve not to dissuade us from trying new things; rather they serve as a palimpsest of past experience from which we can build anew or in a different way.

Now I’m in my 50s, I sometimes find it surreal that I know about things that others do not. But it is important not to be complacent. Experienced time served construction people have huge amount to offer, but their approach won’t necessarily work in an environment where digital technology offers completely different business models. Meanwhile new, enthusiastic technicians bring their thoughts to the table, but they also have to listen if they are to avoid making mistakes others have made before.

Which brings me to what I think was the most interesting session of the Construction Leadership Conference – the presentations and Q&A stream for manufacturers on day two.

The agenda of the second part of day two was split into two streams, one for designers and specifiers, the other for manufacturers. The NBS had chosen John Stephan and Mithun Patel of BDO, Peter Capelhorn and Adam Turk of the CPA and Robin Cordy of the NBS to talk to manufacturers about how the landscape of manufacturing for construction may change in the coming years, from the viewpoint of the economy, regulation and marketing.

Peter Capelhorn was unable to make his presentation about the new Competency Framework, citing local technical difficulties; but he was able to join the Q&A. This was disappointing, but he has agreed instead to present his talk at an NBS Webinar on the 9th November.

This presentation will explain to manufacturers what they are going to have to do about competency as set up by the Steering Group on Competences for Building a Safer Future of which Capelhorn is deputy chair, and quiz him about their reports, Raising the Bar (2019) and Setting the Bar (2020) and how these will impact on manufacturing.

Fortunately, Adam Turk was able to present some information about the Marketing Integrity Group, another CPA managed group arising out of Hackitt’s work, which has been working since 2018 on a code of practice for construction product manufacturers. The MIG has so far published initial findings of a survey of 238 construction product manufacturers, merchants and distributors and 286 users of their information.

I first found out about the Code of Contact that the Marketing Integrity Group was planning via a tweet from a CPA lunch event by Liz Male, listing an early draft of the document back in February, and was intrigued. My immediate reaction at the time, was that this is a huge undertaking which would have major implications on construction marketers and their clients. The Summit Presentation was a welcome opportunity to hear more detail of what this code was going to look like and how it was going to be regulated and administered.

Turk’s presentation outlined the main elements of what is now being called the Code of Conduct for Construction Product Information (CCPI). I paraphrased these in a twitter thread here on the day:

Turk’s presentation produced a flurry of questions on the chat, many from experienced marketers in the audience. Some of these questions were answered in the Q&A and hopefully more information and opportunities to participate in the process will be forthcoming. The buzzing chat stream during the event and afterwards was an indication that it is a controversial topic which needs some airing, and the light of some critical friends will give it a chance of success.

The NBS acted as polite, helpful hosts throughout the event. By using an interactive platform choice (Hopin) and by encouraging conversations on Twitter under the hashtag #CLS2020 they enabled these conversations to happen. In an environment where many are missing spontaneous interaction, this was welcome and productive.

I feel that the construction industry is in a huge amount of pain right now. I’m not talking about commercial pain, though that is considerable for many and will only get worse in the years to come. The pain is a combination of shame, anger and frustration at not being able to fix our broken contracting method, the double jeopardy of risk transfer and late payment, the baffling complexity that led to Grenfell, and constant sense that whatever our aspirations are, they will always be thwarted by regulation, technology and culture.

But that just isn’t good enough. We must have critical friends and hear them.

I’m going to take my own advice and flag up two of the many excellent online voices, Fire Safety Management Consultant, Phil Murphy and Engineer Dr Jonathan Evans FIMechE. On Friday they tweeted this, referencing Dame Judith Hackitt’s speech at the conference:

Hackitt’s plea to do the right thing is laudable, but we need strong and open leadership to make that happen; leadership that is willing to have critical friends.

In the end, if we don’t take on board the commercial nature of construction, apply regulation with real teeth to force change to happen, and also listen to those who will have to implement that regulation and take their responses into account, in another three years we’ll still be looking back at Grenfell and saying, ‘we really need to do something about this’.

<SPEAKER ANNOUNCEMENT>
We’re delighted to announce that Alex MacLaren, @HWU_archi Associate Professor in Architecture at Heriot-Watt University, will be joining us at the #ApolloProtocol Circularity Hack in London on 9th February.
🧵

The #ApolloProtocol Team have released an article about their third hack event and how the Apollo Forum community has explored the theme of #circularity, or the #circulareconomy .