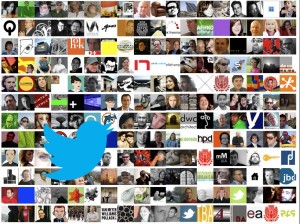 Twitter is a Trivial Waste of Time – this is a commonly held view, and it isn’t surprising one. Twitter is a great deal of noise and from the outside you only see the most popular stuff – talk about celebrities, breaking news and trivia.  But think about if you could hear every telephone call in London; that would be noisy too. Twitter isn’t about hearing everything; it is about being able to find anything.

Twitter is only for the Young – Well the demographic of Twitter is younger that’s true, but in 2012 the average age of a twitter user was 37, and with at least ten million active UK twitter users, some of those might be useful to you. 55% of twitter users are over 35. Its not really a platform dominated by young people

Twitter isn’t about Business – A bit like we used to see LinkedIn as only about getting your next job, Twitter has suffered from the mass media selling it as a populist platform. But drill down and you’ll find many construction professionals on Twitter, and their customers.

Twitter is a wide-open network, which means you can search for key words and phrases at any time and find the people talking about them and join in if you like.

Groups of people form and reform conversations around subjects all the time, in a kind of dance of topicality, their conversations in full view of the world.

Whilst not as popular as Linkedin to the rather conservative construction industry, Twitter has other advantages which can be useful when you’re trying to raise the profile of your business.

Because it is wide open, people from anywhere across the network can listen in and check you out until they are ready to approach you. Indeed, the vast majority of people on twitter are lurking, and when they get in touch it can be quite a pleasant surprise.

Twitter is entirely opt in, so unlike professional networking you can’t get pinned into the corner by someone you don’t want to talk to. This makes it a very efficient way to find people with expertise, and for people to find you.

Most of my construction clients who carry out a strategy exercise find a constituency on twitter, albeit a little more hidden than on LinkedIn. I have an account that only follows architects. I gave up when I reached 2500, but the account has over 32,000 followers who read its daily newsletter of things architects share. I also have an account that follows UK Housing people. Many housing professionals use twitter to debate the nuances of their work, and you can join in.

So Twitter is a tool to talk to strangers, and for them to find you. You’ll also be surprised to find some of your employees on Twitter. What are they doing?

Why do we need to teach our staff to use Twitter properly? Twitter is a very powerful amplifier of your message; once you understand some key techniques it can be an important part of a social media strategy. But get it wrong and you can waste an awful lot of time. It is easy for the untrained novice to make some simple mistakes and not be able to show anything for their efforts.

Like all social media platforms, Twitter needs to be handled properly. We need to understand how it works and equip our staff to use it well with the right tools and techniques, making efficient use of their time and learning by measuring the results.

In house training for your team is available by appointment – please get in touch with your requirements.

If you’re not sure whether Twitter should be part of your Social Media Strategy, read more about how to develop a strategy here.