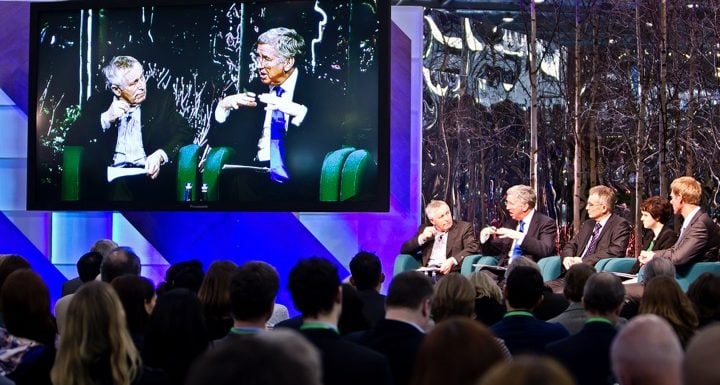 I’m often asked, ‘what hashtag should we use?’ by clients who are organising an event, and sometimes I’m the person who suggests that an event should have a hashtag. So I thought I’d write a blog post to help you choose a hashtag.

If you want to choose a hashtag for your event, how should you go about it?

In this post I describe what hashtags are, why they are important, and the steps you should make to choose a hashtag that is ideal for your event.

A hashtag is a way of curating tweets on Twitter into one search list. If you use any word (without symbols or spaces) after a # symbol on Twitter, it becomes clickable, leading to an automatically curated list of all the tweets that have used the hashtag.

This means that anyone can make a hashtag, and anyone can use a hashtag. Something to remember when you’re thinking about choosing one.

The hashtag symbol was used in various ways around the internet, but in 2007 a Twitter user called Chris Messina was looking for a way to make the eavesdropping experience on Twitter work better and looked at the idea of ‘groupings’ or ‘channels’ which various people were discussing at the time.

Since its early days on Twitter, the concept of hashtags has grown of course, and is now used on most social media platforms, including Instagram of course, where people routinely use hashtags both to find topics of interest and to get seen by people interested in topics they are sharing about. LinkedIn has also recently introduced hashtag features including a feature where you can ‘follow’ hashtags.  For the purpose of this post I’ll focus on Twitter hashtags, but the principles apply to all social media platforms where hashtags work, and you may wish to use the same hashtag on several different platforms.

It’s really interesting to go and check out the historical context of hashtags on twitter, because it tells you a lot about how twitter evolved in the early years, with people identifying ways in which it could work better for its users and these being implemented – replies, retweets, lists… I could go on, but I digress.

What are Event Hashtags?

Event hashtags are a particular type of hashtag which an event organiser uses to curate together all the tweets for an event. Such an event might be a twitter chat, a campaign, or an in-person event like a seminar or trade show, where the hashtag can help the organiser track the visibility of the event on twitter. People attending the event in person or virtually can use the hashtag to find others doing the same, announce their participation and engage in conversations about the event.

How to choose a good hashtag for your event

Here are my five tips for choosing a hashtag for your event:

Make sure the hashtag you use isn’t being used by anyone else. This is really important if you want to track the reach of your event by tracking the hashtag, as you don’t want loads of other tweets obscuring the data. It can also be frustrating for users as they’ll have to wade through those irrelevant tweets.

The best way to check is to use Twitter search to search for the hashtag and check out the results. If there are only a few tweets with the hashtag it shouldn’t matter too much, but if there are many, think about choosing a different one.

A good example is the Construction Marketing Awards. CMA is such a common abbreviation – and the hashtag #CMAawards is also used by the Country Music Awards which has its event at a similar time in the year and produces a lot more tweets. Switching to #CMA2018, #CMA2019 and so on hasn’t helped that much as the Country Music Awards and the Canadian Medical Association also uses these.

Think about how you can make your hashtag unique to your event.

The second tip is to make sure the hashtag you are going to use is easily recognisable by people who don’t know about you. Dropping the three letter acronyms helps.

Think about using actual words that the event is about, like fire, construction, design, property, interiors or whatever.

Think about using the type of event too like webinar, expo, conference, day, seminar, training.

You can use these terms in your hashtag, and they will also identify other potential hashtags you can use to widen the reach of your event.  Do your audience use particular hashtags already, like #workplace, #HR or #FM? Don’t use these for the event itself but introduce them alongside your event hashtag to introduce the event to interested parties.

Alongside the topic and the type of event, consider whether you need to use some branding. Would a sponsor welcome a name drop? It can help differentiate your hashtags from others around the same topic. Here are some unused examples. By introducing a brand name, we can make the hashtag unique:

Once you have the three elements, you may find that you’ve got a rather long hashtag, and this is an issue. Not so much with the character limit; at 280 characters most people can say what they want. It is more an issue of the time it takes someone to type it in on a mobile phone – if it takes too long, they won’t bother using it, or worse, they’ll start using another hashtag you’re not keeping tabs on.

The introduction of a brand can sometimes make the hashtag too long – and it can put people off. Think how the BBC insists on always using BBC in its hashtags (#BBCWATO) though people tend to use the original (#WATO). The result is people use one or the other, or some go to the trouble of using both – not ideal!

Shorten your hashtag as much as you can, whilst retaining some kind of recognition. Try to keep it under 10 characters if you can. Think recognisable abbreviations:

5. Think about the Long Term

Should you include a year in the hashtag for an annual event? This is done quite a lot with annual trade shows, conferences and awards. There is a benefit, in that you can keep each group of tweets together, and even reference previous years from new years:

The downside is that people can’t see all the tweets in one search, so ask yourself if that is an issue for your event. Remember to keep the length manageable, and only add years if you’re thinking of corralling your hashtags strongly, for an event which is going to repeat annually.

Sometimes hashtags can take on a life far beyond your event. Because they have no use by date, they can be used in perpetuity, which can be useful in keeping people in touch over a longer period, or even with an alternative purpose. The hashtag #ukbimcrew is an example of this, where a hashtag which was developed for a group of UK people at a large international event turned into a tool for that community which has continued for many years – long after its original purpose was exhausted. This wouldn’t have happened if it had been heavily associated with the event itself.

In Conclusion – Choose a Hashtag!

In conclusion, if you’re thinking of running an event, choose a hashtag! It can help people find out about the event, help you find people who are interested, and keep people in touch before, during and afterwards. And don’t forget to track your hashtag for measurable evidence of the visibility of your event.

Let's celebrate innovation in our sector.