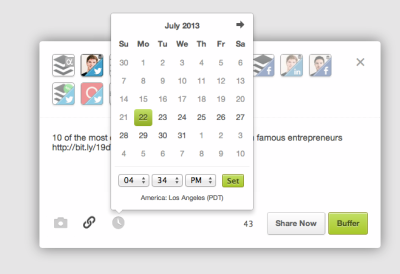 If you’re using Buffer to schedule messages to Twitter, Facebook, Linkedin or Google+ you need to know that this afternoon UK time they announced that their system had been compromised.

There’s an article in Techcrunch describing what has happened in more detail so far.

Fortunately this has happened over the weekend – and will probably only affect users who have posted on Buffer in the last 12 hours. None of my accounts were affected, and if you’re accounts are not sending out messages about weight loss you’re probably ok!

Techcrunch recommends you revoke access from Buffer on the platforms to which you’re posting, just in case, until they sort the security breach. Here are the links I’ve found already:

My good friend Steven Healey alerted me to this. Thanks to him, and thanks to Buffer, who are doing their best to contact all users and sort the problem as soon as possible.

If you have any other direct links to revoke access on other platforms, why not share them below?